Workplace politics is not the same as politics in the workplace

It’s a common understanding to not talk politics at work. But, after spending over a year reviewing and synthesizing academic research from political scientists, management scholars, and psychologists — we found that politics actually has a lot to do with work and workplace dynamics.

In part, this may be because over the past decade, terms like authenticity, inclusivity, and belonging have become buzzwords as organizations strive to create social climates that respect and value the unique identities of all employees. While policies and messages encouraging individuals to “bring their full selves to work” are well intentioned, there may be unintended consequences if employees bring their political selves to work.

Politics is an increasingly salient part of day to day life — and polarization based on political views has increased dramatically in the past 15 years. What is more, Americans, for example, are increasingly living exclusively near others whose politics are similar to their own, even refusing to marry others with opposing political views in some cases. This ultimately reduces exposure to opposing perspectives in many social contexts. Further, this research suggests that individuals feel more negatively about those with different politics than they do about individuals of different races, religions, nationalities, sexual orientations, and many other demographic variables.

But what does this have to do with the workplace? While some might argue that political issues and divisiveness just are not relevant to the workplace, a survey done by the Society of Human Resource Management (SHRM) in 2019 suggests this is not the case. Here are some noteworthy findings:

You might be thinking, “But no one ever discusses political candidates at my workplace, so politics is not really an issue.” However, politics can — and does — enter the workplace in much more subtle ways. Political scientists have likened this rise in political polarization to an oil spill, such that politics have gradually consumed more and more of what were previously considered ‘apolitical’ attitudes, opinions, and beliefs within society.

One need not look further than the contentious issue of mask-wearing during the current Covid-19 pandemic as a salient example. Moreover, evidence suggests that even seemingly inconsequential cultural preferences — such as cars driven, television shows watched, and musical taste — can serve as political signals of deeper beliefs and values. As many employees across the globe are being forced to integrate their home lives and their work lives due to the pandemic, more of these subtle signals about a coworker’s political preferences are going to be accidentally shared with others—through glimpses into their living rooms, kitchens, and private offices.

Further, we know from research that individuals may use these signals from their peers to form opinions about their political preferences (e.g., form political stereotypes) and could be biased against coworkers who do not hold the same views. In a workplace, this can have implications for everything from informal conversations and socialization practices (e.g., your choice of lunch partners) to important decisions regarding who to hire and promote. In sum, whether conversations about an election or politically charged topics are commonplace in your office or not, politics may be influencing the interpersonal dynamics of your workplace.

The first step in dealing with political divisiveness in the workplace is awareness. Most Diversity & Inclusion (D&I) policies do not explicitly acknowledge political ideological diversity. Yet, for many individuals, their political ideologies and beliefs are important aspects of their identity. If organizations are promoting inclusivity in the workplace, it is essential to understand that political diversity may be a downstream consequence. Because political beliefs often evoke strong moral reactions and emotional responses when challenged or confronted, difficult conversations and relational conflict may result from this form of diversity. While formal D&I policies should acknowledge political diversity, there are many things managers and employees can do on their own to cope with political differences at work.

Below we highlight a few things that you should NOT do before moving on to some strategies that may be effective in addressing the complexity of political diversity at work.

It might seem like your entire team shares the same beliefs and that talking about politics is low stakes because everyone agrees, but that might not be the case. Many people may feel that it is necessary to hide or mask their political identities — especially if they do not feel that their beliefs are congruent with their work group or the wider organization. It is important to recognize political beliefs are really ‘hidden’ identities, and keep in mind that someone’s cultural preferences might be influencing your perceptions of their political values.

In addition, someone who laughs at a disparaging comment made about a political candidate might only be doing so to fit in and may feel more and more alienated from the group if such comments continue. Before wading into political territory, it is best to check your assumptions about the political similarity of your group, or not make political comments at all. It would be wise for leaders to avoid making blanket statements about the perceived sentiment of their entire team, as this may accidentally alienate specific individuals.

When in doubt, acknowledge that individuals may be experiencing a variety of emotions and make sure the social climate is safe for all. Keep front and center that your colleagues at work will likely be around long after any impending election takes place.

Given the potential conflict that can stem from political differences, as a leader, it may be tempting to simply make a policy that says, ‘No Politics at Work.’ Unfortunately, this approach is unlikely to stop the more determined individuals from having these conversations, and attempts to limit conversation may also appear at odds with an organization’s broader inclusivity messages. As SHRM President & CEO Johnny Taylor said during his Keynote at Inclusion 2019, “Companies can’t, and shouldn’t, try to quash these conversations because — contrary to popular belief — they’re already happening. But what they can do is create inclusive cultures of civility where difference is not a disruption.”

Despite the potential for conflict on the basis of political differences, some research has shown that political diversity can have benefits in terms of the creativity and quality of team outcomes. To unlock any potential benefits — and, perhaps more importantly, avoid negative consequences — it is imperative that strong norms are established to guide politically charged conversations.

Borrowing from political scientists who have studied politically diverse groups tasked with finding political compromise, norms should include demonstrating mutual respect, affording everyone the opportunity to adequately express different points of view, and giving all arguments due consideration. In addition, it may be useful to encourage such conversations take place in a relatively private space so that individuals who desire to be involved can be, while others who wish not to take part have the opportunity to disengage. Establishing and encouraging norms of civil discourse can help to cultivate a social climate of civility in which all employees feel valued and respected.

Political ideologies are shaped and influenced by each individual’s unique life experiences and those of their family. For example, an individual raised in a flood–prone area where waters have continued to rise in his ancestral home over the past few decades may have a very different view on climate change than someone who grew up in the higher grounds of a mountain.

When discussing the ‘what’ of a political issue (e.g., your beliefs/opinions on what ought to occur) it can be easy to forget to consider an individual’s ‘why’ (e.g., where their belief comes from). By pausing to perspective–take, or imagine the world from the other’s vantage point, you may begin to understand why they feel the way they do and this can allow you to move past your differences without harboring negative emotions towards the individual. Recognizing that we each have unique backgrounds and experiences which shape our worldviews is a critical first step in harnessing the benefits of diversity and creating an inclusive organization.

As the political landscape further unfolds across the globe, employees and leaders alike should be aware of the potential impact of politics on workplace dynamics and take steps to mitigate potential negative consequences that can arise from political discussions at work.

This blog was written in collaboration with Kristen Swigart, M.A, a Ph.D. Candidate at Penn State University where she studies leadership development, identity, and diversity. Most recently, Kristen published a review paper in the Journal of Management on the topic of political ideology in organizations. In addition to her scholarly work, Kristen has held a variety of consulting positions in people analytics – working with organizations such as PSI, PwC, and the Army Research Institute. She is most passionate about opportunities that allow her to connect research with practice in the area of leadership assessment and development and has experience leading various assessment centers. Kristen holds a bachelor’s degree from Penn State University and a master’s degree from George Mason University.

The topic of Diversity and Inclusion (D&I) is an area of emphasis for many organizations right now.

Organizations that have been successful at creating sustainable change in D&I have had strong commitment, and action, among their leadership.

In this whitepaper, you will learn about the role that leaders play in creating an inclusive culture, one that strives to create allies, or champions for diversity, as well as the leadership competencies and characteristics that contribute to inclusive behavior and climate. 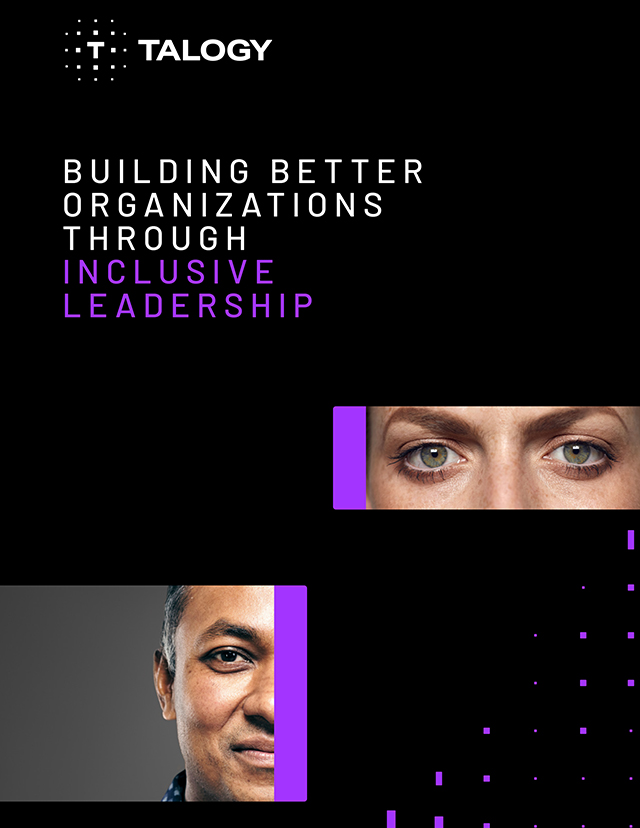