How to overcome proximity bias in the workplace

Proximity bias became a hot topic recently and we have been considering the associated implications and advising on how to minimize its impact. As we see people slowly returning back to ‘normal,’ it is equally important to acknowledge that the future of work will never again be the same. There is no one-size-fits-all approach that can be universally applied from one organization to another. The workplace will now consist of employees who exclusively work virtually, some on-site, and some hybrid.

While these varied ways of work choices offer a greater level of flexibility that many employees crave, there are some challenges that can arise. One of the biggest potential pitfalls of managing a team with different working arrangements – or even geographical locations – is the growing prevalence of proximity bias.

So, what is proximity bias?

Proximity bias is the idea that employees with close physical proximity to their company leaders will be perceived as better workers and ultimately find more success in the workplace than their remote counterparts. In sum, proximity bias is when leaders show preference toward employees who are in their immediate vicinity.

Why is it important to be aware of proximity bias?

It isn’t difficult to see how the trend of proximity bias originates. We tend to have a closer relationship with those we see regularly versus those that we only see occasionally. And while this is human nature, it is important that leaders become more aware of it.

One of the major pitfalls it can create is accidental favoritism just by the fact that one spends a lot more time with those in closer proximity. This can then lead to managers making decisions about hiring, performance, and promotion based on familiarity rather than objective criteria.

If your work environment is composed of a mix of remote and hybrid/in-person employees, it has the potential to become a breeding ground for proximity bias. Such favoritism could lead to remote workers feeling disengaged, forgotten, and even to begin questioning their potential and career development in the organization.

As such, the feeling of needing to be in the office more often in order to succeed can also cause anxiety for those who prefer working from home. While no leader ever wants their team members to feel undervalued, the current job climate where open positions are plentiful and job seekers are in short supply makes it all the more important to have engaged employees who feel appreciated in their role.

What are the steps organizations can take to avoid proximity bias?

Being aware of proximity bias and its effect on remote employees is crucial, and it is equally important to take action to minimize such behaviors within both teams and organizations.

Start with these three simple steps:

The first step toward mitigating proximity bias and its negative impact is to have internal discussions with the executive teams about where bias may exist within the organization. One example could be if there are managers/leaders that prefer meeting in person at the expense of being inclusive of remote workers. Recognizing a behavior like this would help the organization to address it and help such leaders to recognize the importance of ensuring that remote and hybrid employees aren’t excluded or neglected. Mitigating these tendencies from the start would prevent them from spilling over into a larger issue down the line.

Some organizations have seen success taking an ‘all or nothing’ approach when it comes to team meetings. One way to do this is to have everyone join the meeting from their own device. This is a good way to hold each other accountable and it provides the same visibility to everyone. It will help to alleviate the possibility of feeling as if it’s an in-office team versus a remote team. It can also increase the feeling of belonging among the team, and as the saying goes, “nobody gets left behind.”

Having a structured and quantifiable system to measure and analyze an employee’s full impact across all areas. This is particularly helpful during performance reviews so that all employees are being measured by the same standards and competencies. Having this system in place would boost assurance that promotional and even hiring decisions made are fair and not the result of leadership rapport.

A holistic example of a good merit system could include a 360-degree review. This allows management to have a well-rounded view of every team member that highlights their accomplishments and contributions. Given the input of multiple colleagues including peers, managers, and direct reports, it’s a fair system that can help to reduce preferential treatment.

Remote work is expected to continue to rise even after the recent pandemic subsides.

Three out of four CEOs recently surveyed indicated they will not bring all employees back on site (Gartner, 2020). With this shift, managers will need to understand how to work remotely themselves, as well as how to lead a team with less structure, fewer opportunities to communicate, and collaboration enabled by technology.

Managers are uniquely positioned to help people realize the benefits of remote work by adapting their leadership style to mitigate the potential pitfalls.

This whitepaper takes a closer look at how organizations can focus on hiring and developing managers with the key competencies proven to be most necessary for success when leading highly efficient and productive remote teams. 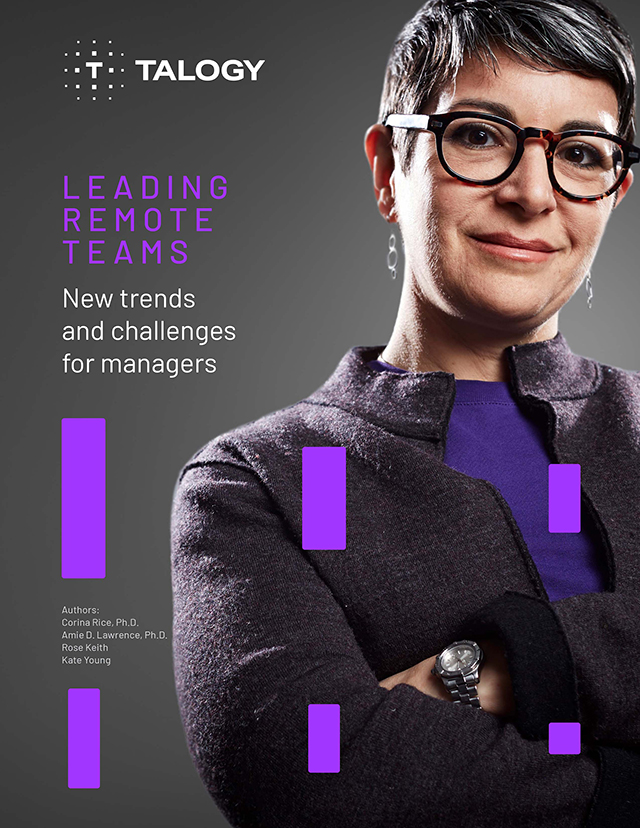