Are you unlocking the competitive advantage of humble leadership?

The quote, “True humility is not thinking less of yourself, it is thinking of yourself less,” provides us with a clear and important perspective. As with many great quotes, its origin has been disputed – it has been attributed to C.S. Lewis (1952), Ken Blanchard (1990), and Rick Warren (2002). While the origin is unclear, the sentiment is spot on.

What is humility and how does it reveal itself in the workplace? Humble individuals tend to:

The rise of more collaborative teamwork as well as the increasingly VUCA (volatile, uncertain, complex, and ambiguous) nature of the global business landscape over the past several decades, and certainly the last several years of a global pandemic, have acutely demonstrated the need for humble leadership. In times of uncertainty, it is valuable for leaders to express vulnerability, admit to not knowing all the answers, and own up to any mistakes that were made.

The effectiveness of humble leadership

The research on leader humility that has accumulated over the last two decades demonstrates that humble leaders tend to be effective in their role. They reduce employee attrition, increase job satisfaction, and boost team innovation and performance. What’s more, when humble leaders are at the helm of the organization, research shows that the positive environment they create for team members trickles down to lower levels of the organization, ultimately leading to better organizational performance.

Taken together, this research suggests that humble leadership can be considered a competitive advantage for organizations. However, it is possible, perhaps even likely, that humble individuals are not seen as leaders given the more traditional view that leaders must be very strong, almost always certain, and mostly infallible. Our penchant for leaders that are highly confident and charismatic may cause us to bypass humble individuals who are potentially effective leaders in favor of others who do not embrace the tenants of humility.

How to incorporate humble leadership into your organization

So, what can be done to unlock the competitive advantage of humility within your organization?

1. Include humility within your values framework and performance evaluations

The elements of humility must be part of the organizations’ DNA; they need to be discussed, praised, and rewarded both formally and informally. Performance evaluations should include not just what an individual accomplishes, but also how they accomplish it. By explicitly including values such as humility within your performance evaluation process, you create an accountability mechanism and incentive structure necessary to reinforce desired humble behaviors.

2. Use humility in hiring and promotion decisions

What should we be looking for when it comes to future leaders who embrace the positive leadership characteristic of humility? In addition to having less of a focus on themselves, three factors have been shown to be important. Look for individuals who:

a. Show a willingness to admit mistakes and limitations

Humble individuals are more likely than non-humble individuals to possess a non-defensive willingness to see themselves accurately and accept that they have both strengths and limitations. As such, humble individuals are more likely than others to seek out feedback from others to understand their ideas and opinions – whether they be positive or negative – to gain a more realistic understanding of themselves. Thus, rather than being inclined toward self-promotion or self-enhancement, humble leaders are instead open to both knowing their limitations and sharing their limitations with others.

Humble individuals demonstrate a willingness to keep an open mind and are committed to continuously learning and improving. Given their recognition that they are not all-knowing and that others also hold valuable strengths, humble individuals tend to be open to new ideas or paradigms and are willing to learn from others. Humility can be described as having an open and receptive mind which leaves us more open to learn from others. While non-humble leaders are more likely to maintain social distance between themselves and others and give off an impression that they are highly-competent and ‘have all the answers,’ humble leaders are quick to switch roles with others and model the tasks that are necessary to complete – demonstrating that they, too, have more to learn.

c. Shine a spotlight on others’ strengths

Because humble individuals have awareness of their own fallibility, they can appraise others more generously by recognizing that people can contribute in different ways to their organization and their teams’ objectives/goals. Ultimately, humble individuals can recognize others’ strengths without being threatened by them. Whereas non-humble leaders may react to a highly capable team member or subordinate with suspicion and be concerned that they might be ‘outshined,’ a humble leader will push high performers into the spotlight and provide them with the resources to succeed.

Why is it so important to take a hard look at the role humility is playing in your organization? The voluminous research literature on leadership demonstrates that we tend to reward individuals who demonstrate assertiveness, self-reliance, and independence. Given that humility is antithetical to such characteristics, it very well may be that potentially strong leaders are being overlooked by those in positions to make promotions. In spotlighting others’ strengths, humble individuals are apt to recognize the skills that all members bring to the group, as such they are more likely to equally share decision-making authority.

It is a good time to take a hard look at what your organization is doing when it comes to selecting leaders and making sure that humility is being appropriately considered as a positive attribute.

Great leaders: what do they do differently?

We all know that having great leaders is critical for success for most organizations.

However, less clear are the behaviors great leaders engage in that others do not. We designed a research program around shedding insights into this issue. In order to answer this question we used our proprietary executive assessment process to assess current leaders. Then we gathered outcome information (e.g., promotions, salary increases, behaviors) so we could see the correlations between assessments scores, job outcomes, and leader behavior. 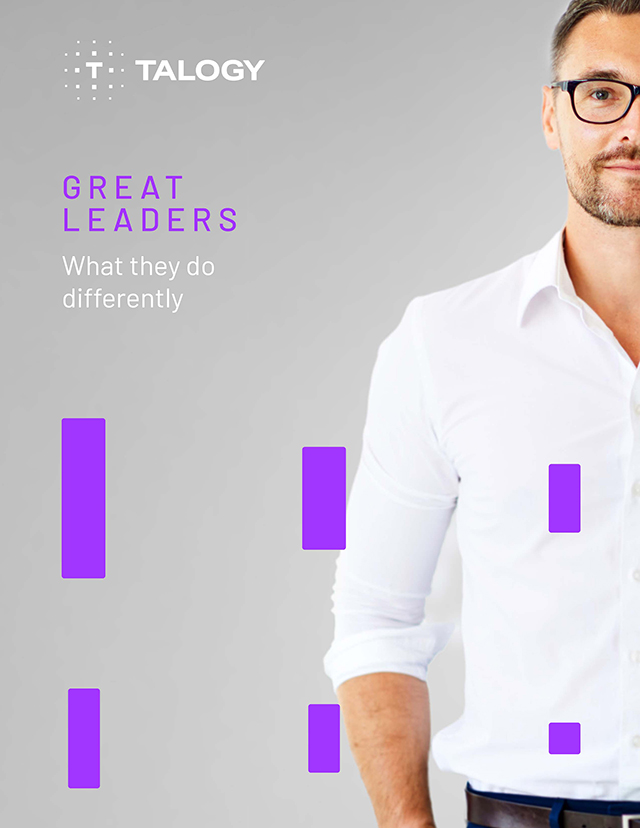